NO Bribery or Corruption at Bloomsday Best Dressed Volunteer Awards?!

It has become traditional for the Friends of Joyce Tower Society (FJT) to award extremely valuable and highly coveted prizes to those judged to be among the best dressed FJT volunteers over the Bloomsday Festival period. In past years, the prize-giving event was joyful, celebratory and uncontroversial. Bribery and canvassing ensured a smooth and predictable outcome.

This year, however, the awards were mired in rumours that underhand dealings involving the normally trustworthy and dependable judges were ignored. Indeed, this reporter has secretly uncovered a photo clearly indicating the exchange of money between an unidentified entrant and a certain Rob Goodbody of the FJT judging panel. Despite this obvious attempt at malfeasance, it appears the judges remained stubbornly impartial and incorruptible.

Sad scenes, so, on the night at ‘Phorous’ (home of the McIlraiths – thanks guys!) of a dejected second placed ‘Best Dressed Male’ declaring that ‘this was not what he had paid for’ only added to suspicions of malpractice being ignored. The uncaring (and knowing?) laughter of the FJT audience further confirmed this unseemly state of affairs.

Was everyone in on the conspiracy?! Does bribery hold no sway anymore? What if this blatant disregard of impropriety were to prevail in all aspects of life?  The political system would collapse! Anarchy would prevail! This is an unthinkable outcome.

Let’s hope that, next year, the brown envelope makes a return to its proper place and we can have the best results money can buy!

In the meantime, here are the results of this year’s competition: 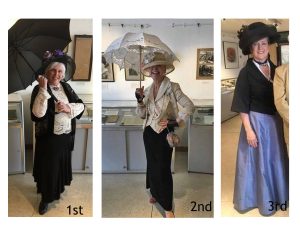 There were several other categories dreamed up by the judges (so that their friends could get prizes?).  These included:

In case you have any complaints, our esteemed Judging Panel for 2019 was made up of Grainne O’Malley, Helen Colgan and Rob Goodbody. Special thanks are also due to Pat Crowley for his terrific support behind the scenes.

The real excitement, however, was the fact that, this year, the FJT volunteers, once again, threw themselves wholeheartedly into the spirit of things throughout the Bloomsday Festival at the tower and delighted our many visitors with their wonderful and creative outfits.

Can’t wait to see what they’ll do for next year!