Niall’s grandmother was a ‘Gerrard’, belonging to a family of stationers on St. Stephen’s Green whose claim to fame is that they were James Joyce’s first publishers!

In 1901, Joyce, then a student, wrote an article for St. Stephen’s, a new college magazine of the Catholic University of Ireland (later to be incorporated into University College, Dublin). In it, he condemned the parochialism of the Irish Literary Theatre. 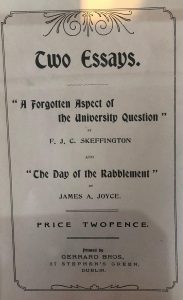 The editor refused to publish Joyce’s composition and, at the same time, refused another article by Francis Skeffington (later Sheehy Skeffington).

The indignant duo promptly marched across the Green and had their articles printed by Gerrard Bros, printers.

In the photos we see Niall and Hugh looking at the copy of the publication on display in the Tower and a picture of the Gerrard Bros publication itself.