The Friends of Joyce Tower Society’s AGM was held in the Haddington Hotel, Dun Laoghaire this week. 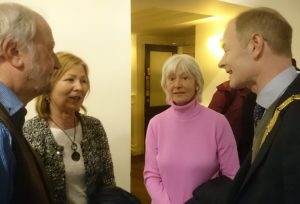 As is now becoming an annual tradition, the Cathaoirleach of Dun Laoghaire/Rathdown County Council came along to meet with some of our volunteers and to address the AGM attendees.

We were delighted to welcome Cathaoirleach Ossain Smyth who, being a Green Party representative arrived on his bike. He showed off his beautiful chain of office of which the FJT Chairman was extremely jealous! 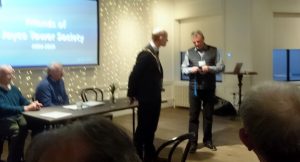 The Cathaoirleach spoke of the terrific contribution made by organisations like the FJT and, in his speech, showed a great knowledge of things Joyce.

Chairman of the FJT (James Holahan) opened the formal part of the meeting by remembering Bob Waddell a former volunteer with the FJT A local resident and activist, Bob had contributed much to his community. He passed away earlier this year and he will be missed. 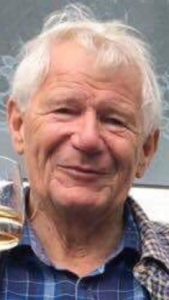 The Chairman went on to review 2018 highlighting the continued success of the Friends in terms of delivering against their key objective of providing ‘volunteer staff now and into the future to ensure that the James Joyce Tower & Museum remains open and can be enjoyed for free as a site of major literary and historic importance by locals and visitors alike.‘ He cited the record-breaking visitor numbers (45k), the enormously positive feedback and the successful programme of events throughout the year as evidence of this success.

He also mentioned the importance of maintaining the processes and procedures that have been put in place to ensure the continued delivery of the service to the tower. He noted that the main challenge for the immediate future is the number of active volunteers and opined that the role of the Chief Coordinator is crucial in the execution of a well organised rota system – the key element of FJT’s future at the tower.

The Chairman went into some detail in relation to the status of the takeover of the tower by DLR.  He outlined the strategy, the main elements and the current situation regarding the implementation of the planned transfer and expressed his disappointment that final signing off of the various contracts had been postponed.  He considered, however, that this final step in the tower’s transfer was imminent and so he, Mike Fitzgerald and Rob Goodbody would step down from the committee of FJT to focus on the establishment of ‘Omphalos’ the proposed new operating company.

There was great interest and many questions in relation to these important developments for the tower’s future and the implications for the Friends.

Séamus Cannon updated the AGM on the financial state of the FJT which is very healthy.

The meeting closed with the Chairman thanking all the committee members who had supported him over his years in office.  He also expressed his immense admiration and gratitude to all the FJT volunteers who have worked tirelessly at the tower.  He offered his support to the new committee (especially in volunteer training) and wished them every success into the future.