I recently had a quick look at Zoom’s corporate website where I found this statement:

‘Being separated from our teams, our family, and our friends is never easy. But even in the most trying of times, we’ve loved seeing you find new ways to come together on Zoom’.

Zoom also claims that an expression of its culture is to ‘deliver happiness’.

At this stage in the seemingly relentless onslaught of this awful Covid thingy, it’s hard to imagine how we could endure a world without the interweb and its facilitation of virtual, safe and (mostly) enjoyable ‘get-togethers’.

The Zoom app has been an invaluable tool for governments, businesses, organisations and individuals as we all try to stay in touch.

It has certainly been a great way for the FJT Wednesday Reading Group to stay connected. Perhaps, for us, it has even delivered on its goal of delivering happiness – I definitely think so. 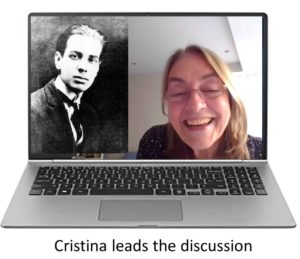 Well, our dose of Zoom happiness was delivered, this week, courtesy of the delightful Cristina Abaca who guided us through her outstandingly professional and captivating presentation on Jorge Luis Borges (1899 – 1986) and his connections with James Joyce.

Cristina began her introduction to Borges by stating that, although acclaimed as Argentina’s most famous literary son, he (like Joyce) is not widely read by his compatriots.

Born in Buenos Aires, we were told, he was the son of a highly intellectual father with a military family background who boasted a magnificent library (that would, perhaps, have made an impressive Zoom backdrop?). 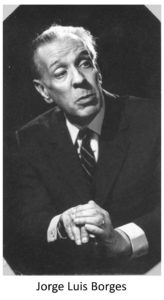 Indeed, Borges, when asked later to describe a ‘chief event’ in his life would reply that it was ‘my father’s library’.

‘A love of libraries was one of the many things Borges shared with Joyce’, Cristina remarked.

Borges’ mother was multilingual and read to a young Borges in English, French and Spanish. He also had an English grandmother who would read to him (in English) from Kipling, Dickens and other famous authors.

The scholarly ambience of his upbringing and his nurturing by his parents as a ‘free thinker’ was important in the shaping of Borges as a future writer and intellect.

Even as a child, the home schooled Borges would display evidence of his literary prowess. He translated Oscar Wilde’s ‘The Happy Prince’ into Spanish – at only nine years of age!

A need to receive treatment for his failing eyesight forced Borges’ father to move the family to Geneva in 1914 and they would remain in Europe until 1921 living primarily in Switzerland and in Spain. During this period in his life, Borges added German and Latin to his growing repertoire of languages – his prowess at languages mirrored that of Joyce.

He also sought and enjoyed the company of philosophers, writers, sociologists and other intellectuals.

Borges read voraciously at this time and one of his much loved works was Fritz Mauthner’s (three volume) ‘Contributions Towards the Critique of Language’ – a book also highly regarded by James Joyce.

Upon the return of his family to Argentina, Borges began his own writing whilst also working as a librarian. His first publication was a book of poetry, ‘Fervor de Buenos Aires’. 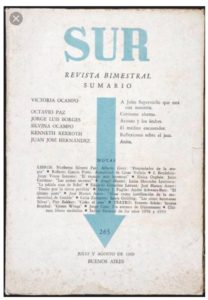 ‘Sur’ was a literary journal founded, in 1931, by Victoria Ocampo to which Borges became a regular contributor. Ocampo and Borges became friends and, together with Adolfo Bioy Casares (who was introduced to Burges by Ocampo), they formed the core of an intellectual grouping in Buenos Aires.

Although Borges continued to write, translate and explore literary works, it was only after his father’s death in 1938 that Borges, himself suffering a severe head injury, emerged as a significant author with his own developing style of writing.

His body of works grew even as he, like his father before him, began to lose his sight (becoming completely blind at 55) and Borges also expanded his interests to include public talks, writing screenplays and other activities. It was around this time that Borges became director of the Argentine National Library.

Cristina gave us some descriptions of Borges’ key works and which she recommended to us. She advised us to begin with ‘The Garden of Forking Paths’, ‘Tlon, Uqbar, Orbi Tertius’, ‘Pierre Menard, Author of the Quijote’ and ‘The Library of Babel’. ‘ Labyrinths’ and ‘The Aleph & other stories’ should also be considered, she added.

It should be noted that Borges wrote short stories rather than novels the latter he described as ‘too much of a bother’.

In his writing, Cristina explained, Borges often challenged the reader by blurring the lines between writer, context, text and the reader themselves and so, like Joyce, much is left to the individual interpretation of the reader.

In further expanding on the connections between our favourite author and Borges, Cristina went into some detail regarding a visit that Borges made to Dublin as part of the Bloomsday celebrations of 1982.

Borges, who had translated the Penelope episode into Argentinian Spanish and described ‘Ulysses’ as ‘a marvellously tortuous’ book, ensconced himself in the Shelbourne Hotel receiving visits from various literary fans.

In the landmark Dublin hotel, Borges delivered judgement on many Irish writers including Beckett (whom he didn’t much like), George Bernard Shaw, Oscar Wilde, George Moore and, of course, James Joyce.

Borges asserted that all of Joyce’s works should be read as poetry and he advised translators to expand their language to accommodate Joyce’s own expansion of English.

Cristina went on to discuss some common themes between the writers including their use of the particular to illustrate the universal and the notion that nationalism and literature are not good bedfellows – literature should be general and without boundaries.

Borges led an amazing and interesting life. He immersed himself in intellectual pursuits, he was a political activist and he was an astute observer and recorder of the human condition.

After travelling and lecturing extensively throughout the latter part of his life, he died in Geneva and, like Joyce, is buried in Switzerland. 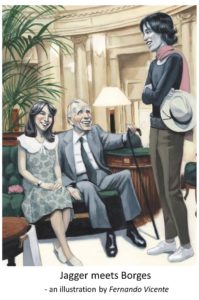 Before taking questions from the virtually assembled Zoomers, Cristina ended her talk with an anecdote involving a meeting between Borges and Mick Jagger who declared himself a great fan of the writer having referenced him in his portrayal of Turner in his film ‘Performance’.

After Cristina’s excellent presentation, there were questions and observations from the group ranging from a remark that neither Jimmy nor Borges had been awarded the Nobel prize (Andrew Basquille) to Mary Milne embarrassing us all by insisting on a show of hand of those of us who had actually read Borges’ works – we didn’t do so well on that question I’m sorry to say.

The wonderfully talented and handsome, James Holahan, asked about Borges’ religious beliefs and his thoughts on life after death.  Cristina responded by outlining Borges’ view that, while it is not likely that there is a heaven; it is not possible that, as long as one is remembered, one could simply disappear.  Cristina referred us to a ‘eulogy’ written by Borges to a friend that further expanded on Borges’ thoughts on this matter and she very kindly emailed it to us after the session.

Cristina put so much work into what was a fantastic presentation, it is hard to summarise her words and do them justice. As the saying goes, ‘you had to be there at the time!’

Thank you so much Cristina Abaca for such an engaging and informative session and thanks Andrew for organising it.

Until next time… Stay safe.