Last Thursday evening, while our neighbours across the ‘Snotgreen’ were busy ensuring an imminent and unstoppable ‘Brexit’, the Friends of Joyce Tower Society members had more weighty matters with which to occupy themselves.

It was decided by ‘the powers that be’ to use the traditional FJT Christmas gathering in the Magpie Inn as an opportunity to debate the burning issue of the day – should Joyce’s remains be repatriated from Zurich (‘Zurexit’) or should his remains remain??

Two teams of master debaters (?) were duly assembled and each delivered arguments in favour of and against a motion ‘That the remains of James Joyce and his wife Nora Barnacle be repatriated’ 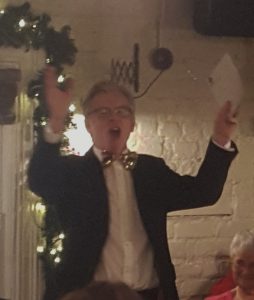 Against were: Anne Hughes, Kevin O’Doherty and Zan O’Doherty

Andrew Basquille who organised the debate also presided as Chairman for the evening.

It being an FJT event, the night, however, did not pass without controversy.

The first speaker in favour of the motion was greatly upset at the Chairman for curtailing his carefully prepared statement which would, he attested have taken a mere 25 minutes in addition to the 3 minutes allocated to each debater. The Chairman was having none of it and he and his irritating bell prevailed. Amid jeers and taunts from the baying crowd, the outraged speaker was silenced.

Next, the partisan audience were spoon-fed fake news from the opposition. That set the tone for the evening. Clear, persuasive, intellectual and thoughtful arguments by the proposition speakers were countered by divisive and populist claptrap from those opposing. 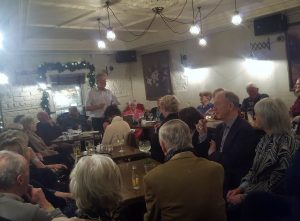 In a shocking display of ‘Bercoesque’ partisanship, the Chairman (aka ‘Tinkerbell’) clearly slowed his clock and silenced his bell for the opposition while rushing and harrying the noble proponents of the motion.

On a show of hands (two hands raised by some!), the neighs had it, the neighs had it. The gullible and impressionable crowd (now, an angry mob) voted overwhelmingly in favour of ‘Remain’ and against ‘Zurexit’- the motion was defeated.

The dejected and defeated proposing team were afforded Garda protection as they left the building to the sound of Remoaners chanting ‘Lock them up, lock them up!’ ringing in their ears.

The Chairman of the FJT, Séamus Cannon, ended the official proceedings by thanking the organisers of the event and expressing his gratitude to the FJT volunteers for their continued dedication to the James Joyce Tower & Museum. To thunderous applause, he also wished all members a very Happy Christmas.

Many attendees stayed late to enjoy, a few songs, some snacks, mince pies – and the odd beverage or two!

Disclaimer: the above report may not constitute a completely unbiased recording of the night and may, instead, have been written by a bitter and disappointed Zurexiteer!