James Joyce’s masterpiece ‘Ulysses’ began, at 8.00 am on the 16th June 1904, atop the iconic Joyce Tower in Sandycove.  That special date is celebrated, every June 16th, throughout the world as Bloomsday in honour of the great author and his work. 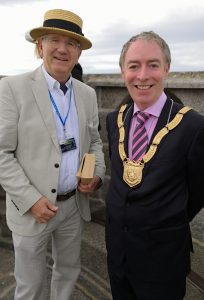 On that date, no place is more important than the James Joyce Tower & Museum where many literary pilgrims begin their own Joycean odysseys.  It was here, after all, that Buck Mulligan first emerged from the tower’s stairway for his early morning shave and signalled the start of a literary work which would gain international acclaim.

To kick-start Bloomsday 2019 at the tower, we were delighted to welcome the Cathaoirleach of Dun Laoghaire-Rathdown County Council, Shay Brennan, as our special guest. Cathaoirleach Brennan was given the task of raising the Munster flag on Bloomsday morning. He was welcomed by the Chairman of the Friends of Joyce Tower Society, Séamus Cannon.

The raising of the flag of the sons of Desmond marked the start of our Bloomsday celebrations which will be reported elsewhere on this site. 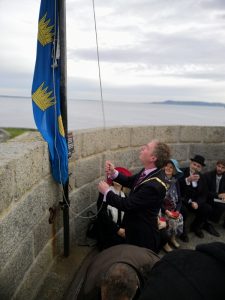 The Cathaoirleach was watched by early Bloomsday risers many dressed in elaborate costume who had come to the tower to begin a day of celebration, fun and revelry.

Thank you, Cathaoirleach, for your attendance and for the recognition of the importance of this wonderful tower/museum together with its volunteer staff – especially on such an important occasion in the Joycean calendar.